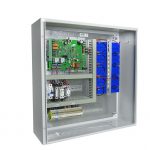 The Semitron Universal panel is an autonomous release system that ensures the release of the cabin occupants in the event of a power outage.

The main advantages of this model are its compatibility with any type of panel of any company and the way in which it manages its nine rechargeable batteries, 12V, which it uses as power supply, to give power to motors up to 10kW.

In order to avoid wasting the energy of its Heaters, Universal has an automatic electronic weighing system that enables it to follow, during release, the lowest energy course.

This way, in the event of a power outage or even a single phase of the three-phase network, Universal isolates the central elevator control panel and, if the safety chain is closed, then frees the occupants